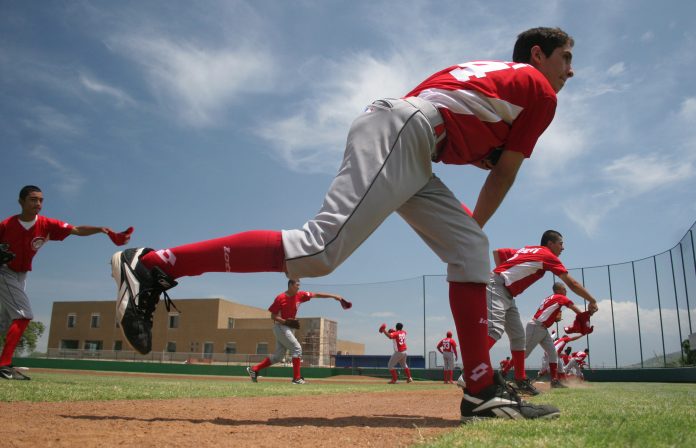 Editor’s Note: This article originally appeared in 2012. We are reupping it here to offer a bit of background on baseball in Oaxaca to coincide with the recent start of the 2018 Mexican Baseball League season (and the Oaxaca Guerreros’ thrilling first game).

It is hard to spend much time in Oaxaca without coming across the name of Alfredo Harp Helú, the philanthropist whose foundation has created such stunning projects as the Textile Museum, the San Pablo Cultural Center and is actively supporting worthwhile Oaxacan education, health, cultural and conservation initiatives everywhere you turn.

You might be surprised to learn, however, that Harp Helú is something of a baseball fanatic and that one of his important, if lesser known, accomplishments here has been the realization of the Alfredo Harp Helú Academia De Bésbol (The Baseball Academy).

The Academy is located on a twenty-five acre spread in sleepy San Bartolo Coyotepec, about nine miles south of Oaxaca . The town gained fame in the 1950’s when one of its potters, Dona Rosa, discovered a polishing and firing technique to produce Barro Negro, the clay pottery which has a distinctive black metallic sheen.

(The entrance to the Academy is across the road from El Tiaponochestli Cochineal Farm, another interesting place to visit.  That is where bugs which produce the vibrant red dye, cochineal, prized since pre-Hispanic times, are nurtured on prickly pear cactus and harvested.

As you enter the Academia De Bésbol gates you are struck immediately by its six professional baseball fields, so uniformly green that you suspect they have artificial turf. But they do not. Their near perfection has been achieved by fertilizing, intensive watering and meticulous grooming. Four of these fields are used exclusively to train as many as 60 promising young players who are attending the Academy in hopes of having a career in baseball. The remaining two fields are used for practice by the Guerreros, Oaxaca’s professional baseball team. You can catch the Guerreros in action between April and September on their home field, the Eduardo Vasconcelos Stadium, on Niños Heros de Chapaultepec, about 15 blocks east of the Zocalo.

The Baseball Academy’s goal is to develop the skills of promising young players while encouraging them to complete their general education. 11-12 year olds are trained on two of the fields and a third is reserved for 13-14 year olds. A fourth field is used primarily for infield instruction. A manager- instructor supervises the Academy’s training staff which includes two pitching instructors, two batting instructors and a physical trainer.

Before the rigorous daily routine begins, a hearty breakfast is served in the Academy’s (spotless) cafeteria. Then youngsters, some aspiring to become the next Felix Hernadez, Albert Pujols or Alex Rodriguez, put in a full morning on the fields, learning and practicing baseball skills. Afternoons are reserved for middle school and high school study, which has been arranged with local academic institutions. Firmly believing in the link between academic excellence and sports performance, the Academy encourages (but does not require) its students to complete high school and to pursue college degrees where qualified.

The Academy’s young baseball hopefuls are housed in a stunning contemporary building equipped with such amenities as a fitness center, library and a computer room.

Tuition and room and board for those fortunate enough to attend the Academy are paid for by the Harp Helú Foundation, eliminating any economic barrier to admission for poor but talented youngsters.

How are prospective candidates for admission selected? The Academy dispatches scouts to youth baseball clubs all over Mexico, to seek out the most promising young players and invite them to attend.

Running such a complex facility with its exacting requirements and diverse personalities, is a challenge. But  Eduardo De Cerdo, Chief Administrator, and a longtime business associate of Harp Helú’s, is unruffled by it all. Almost always displaying a warm smile, he manages to keep the wheels turning smoothly and makes it all look easy. Not many of us could do that.