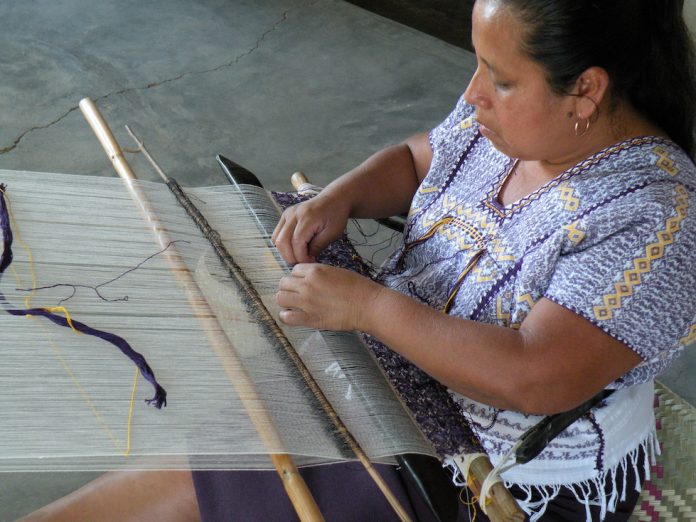 Oaxaca may be most celebrated for old gems such as its Cathedral, Monte Alban, Santo Domingo and its famed Zocalo. But none of its jewels sparkles more brilliantly than its Museo Textil de Oaxaca, the Textile Museum. Here, within buildings as intriguing as the exhibits they contain, a staff of devoted and knowledgeable curators, researchers, and preservationists create exhibits of traditional and contemporary textiles and the techniques and creative processes used to produce and preserve them. The museum, highlighting Oaxacan textiles also features outstanding fabric creations from elsewhere in Mexico and around the world.

The museum’s elaborately carved portal of cantera (Oaxacan green volcanic stone) was originally the front door of the “Angelo House,” an 18th century baroque two-story casa. Angel Antelo Bermudez had it built for himself after amassing a fortune exporting cochineal dye. The building largely retained its architectural integrity until 2002, when a realtor bought it and gutted its interior. Four years later the Alfredo Harp Helú foundation was able to acquire both the house and the adjoining Convent of San Pablo. Gerardo Lopez, a local architect, was entrusted with the task of restoration while Juan José Santivanez, from nearby Huajapan de Leon, was commissioned to add the contemporary elements needed to realize this world-class textile institution.

The Textile Museum is an artful blend of historic & contemporary elements.

The MTO (Museo Textil de Oaxaca) houses 6 large private textile collections and dozens of individual pieces, all donated to the museum. This permanent collection has been enriched by the Harp Foundation’s acquisition of other outstanding works from around the world. The Harp Foundation  financed the museum’s construction and underwrites its operating cost.

Since opening in 2009, the MTO typically mounts six or seven exhibits a year. They are not limited to showing traditional textiles. Hector Meneses, MTO’s youthful, energetic director told me about two innovative shows which ran back in 2014. The first was the cutting-edge exhibit entitled “Electronic Textiles.”  It featured garments and wall hangings woven of natural materials combined with microcomputers, sensors and LEDs (light emitting diodes). The sensors and microcomputers respond to movements of the viewers, causing the LEDs interwoven into the fabrics to change the patterns and texts viewed.  The imaginative work was created by a team of graduate students of Concordia University in Montreal, supervised by Barbara Layne, Associate Professor of Fibers in the university’s Studio Arts Department.

Two other contemporaneous exhibits were launched to celebrate the MTO’s 5th anniversary.  “Conservation Treatments of Textiles,” the first of these, provided a rare behind-the-scenes look at the meticulous work done in the museum’s restoration and conservation workshop. Examples of the different fabric conservation treatments used by MTO will be enhanced with photos and a video.

The second, “Male Costumes”, displays costumes worn by men from near and far. The exhibit featured examples from Mexico, South America, Africa, Asia, and Oceana.

The MTO offers free weekly guided tours of its galleries. English speaking tours begin at 5 PM every Wednesday.  You don’t need a reservation. Just show up at the counter near the entrance a few minutes before 5pm.

But that’s not all that’s happening at this dynamic institution. Depending on when you arrive, you may glimpse through an open door and see an adult’s or children’s workshop exploring a textile technique.  Don’t be surprised if you encounter a class or even a performance in the museum’s courtyard itself.

If you are in Oaxaca in July or December you may be able to attend one of the “Expoventas” held on Fridays, Saturdays and Sundays in which textile artisan groups from Oaxaca and other Mexican states are invited to demonstrate their skills and offer their creations for sale in the adjoining San Pablo Convent courtyard. To get more details about this and everything else that is going on at the MTO, visit their Facebook page.

No trip to the Museo de Textil is complete without a visit to the museum shop located near the entrance. Here you will find a selection of extraordinary textiles and stunning creations made by talented Mexican artists and craftsmen. Should you decide to purchase something, the temporary lightening of your wallet will pale in comparison to the beauty of your acquisition, which will repay you in dividends of pleasure for years to come.