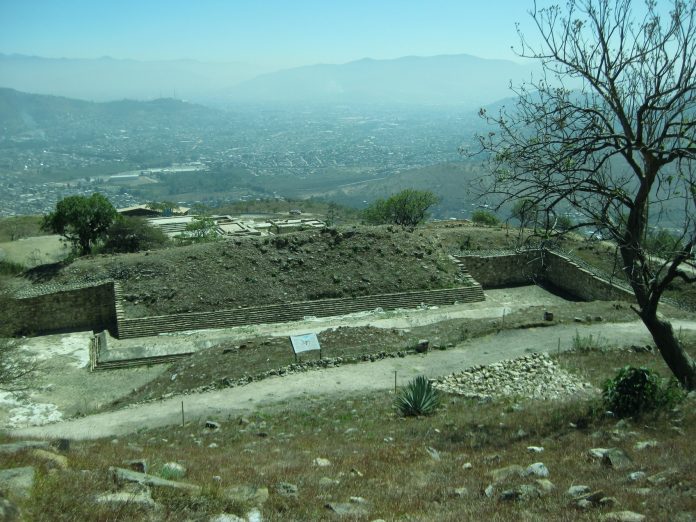 This could be a real estate ad in Greenwich, Palm Beach or Beverly Hills. In fact, it describes La Casa de Oriente (East House) built by Zapotecs a thousand years ago on El Bonitte, the terraced mountainside above the nearby town of Santa Maria Atzompa. As the crow flies it is barely two and a half miles from Monte Alban.

La Casa de Oriente was one of the first buildings excavated in a continuing revelation of this major new archeological site, officially opened to the public in 2013.

Investigation of this ancient upscale community, whose existence was long known to town residents, began in 1940 by archeologist Jorge R. Costa, a member of the team lead by Alfonso Caso who directed the excavation of Monte Alban.

This was my second visit to the Atzompa site. Two years ago, I slipped in on a Sunday afternoon with an adventurous young Mexican friend. This time I was with my wife Olga, two close friends, Joan and Sam Bartlett and Gordon Maul of Tierraventura, an off-the-beaten-path tour company, who drove us there in his well broken-in red Ford truck.

While a driver and guide are always helpful, Atzompa is a place you can visit and understand on your own. A bus near the Abastos market or a colectivo with its windshield marked “Atzompa” at the colectivo stand in front of the Second Class Bus Station will get you into the town of Santa Maria Atzompa in thirty minutes. Hardy hikers can hoof it from there. Others should commandeer a local taxi.

As you climb the newly built crushed stone foot path above the parking lot, past the guard house, you reach the excavated Casa del Oriente, the upper class dwelling described above. Here, as at all the site’s other major building excavations and reconstructions, is an illustrated story board describing it in Spanish and English.

Climbing further you arrive at the ball courts. The largest of the three is almost 150 feet long and was used by Monte Alban for important public games. The smaller two were probably privately owned. Further up, at the north side of the site is the Funerary, a 65 foot square building topped with a small one story stucco temple. Inside the large building are three funerary chambers, one atop another.

The walls and ceilings of two of them have brilliantly colored murals with prominent geometric shapes, probably related to the ball game. Near the top of the site is Plaza “A” a grand 164 foot square, surrounded by important public buildings and the locus of Zapotec ceremonial worship.

Following the path back down you come upon the reconstruction of a kiln used by the Zapotecs and illustration of the pottery they produced in it. The original kiln, found buried under the stucco floor of the Casa de los Altos, is similar in size and shape to modern kilns in Oaxaca.

There is a little museum and so much more to see here, but it’s getting late. As the sun descends in the West, it shines a golden light on Atzompa’s ancient stones. One can imagine day’s end, a millennium ago, in this quiet place. An Atzompan, sipping pulque from a stone mug, gazes at the glorious valley and surrounding mountains – contemplates life as it may have been in an unknowable past, and what an inscrutable future may hold. Like ourselves. Quizás (perhaps).